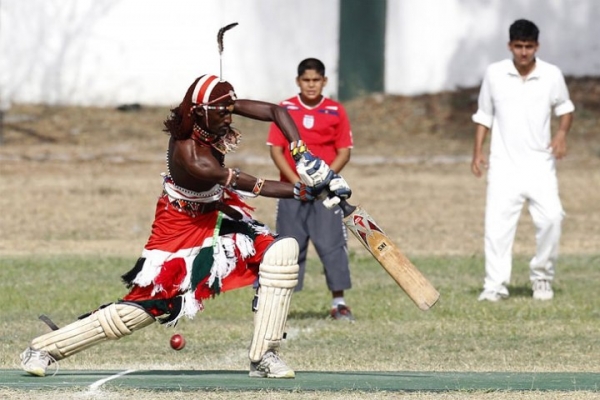 The Club Cricket Conference is encouraging clubs to support a proposed 2013 tour of England by the Maasai Warriors by making financial contributions. The young Maasai players want bring about cultural changes within their community.

Jonathan Agnew discussed the story of Maasai cricket on Test Match Special during the recent Test match in Calcutta, mentioning a documentary film on how cricket could help modernise Maasai attitudes on the outer fringes of Kenyan society. With England fast bowler Jimmy Anderson an executive producer, filming has progressed through the winter months.

The CCC are encouraging clubs to help bring the Africans over to these shores for the first time and enhance their experience of the outside world. A group young Maasai men have taken up cricket and have improved fast enough as novices to seek new challenges.

The story of the Maasai is remarkable. The tribe has clans who all too regularly make war against each other and steal livestock. Some of the younger generation have started to challenge ancient traditions and hostilities by playing cricket, and they want to end the tribe's isolation. The Maasai adopt practices that in some instances can only be considered as outmoded, even barbaric, to most people: female genital mutilation, forced early marriages, the selling of children to buy cattle, no women’s rights, open warfare...

Simon Prodger, a CCC committee member with close links to Kenya, said: "Whilst it is not for any of us to demand change to tribal rites that have existed since the Maasai first emerged, that change is being taken up by an element of the youth of the tribe and most especially through the members of their cricket team. They are brave young people, challenging ancient practices and taking on influential and forceful elders. Since the creation of the team three years ago, they have used it to highlight some of these issues and use their sport as a means for change."

The Maasai Warriors are unique in one aspect. Their colourful playing attire consists of sandals made from recycled tyres, a traditional red 'shuka' wrap around their bodies, decorated with beads and bracelets.

Several Kenya internationals have helped with coaching, and some potential friction arose when Steve Tikolo wanted the Warriors to wear whites for the Last Man Stands fun tournament in Cape Town in April 2012. The shuka won the argument that time, though Tikolo might have a point if the Masai Warriors were to rise to a serious level, especially on a chilly English afternoon.

Masai cricket was established by a South African cricket enthusiast Aliya Bauer while on conservation work in the Rift Valley Province about five years ago. She taught the game to some school children, and boys passing through the village began to take an interest, leading to a keen nucleus. It was reported that one player would walk some 10 miles to attend practice.

The ICC provided the Warriors with funding in late 2010 for a tournament run on World AIDS Day. Coaching and equipment was provided by Cricket Without Boundaries, a UK-based charity assisted by the ICC, and the British Army Training Unit Kenya. The Warriors have already achieved strides in promoting tourism in Kenya, and a trip to England should enhance their cricket education as novices.

On their Facebook page the Warriors say they are ready to take on any teams who wish to make a trip to Kenya: "We can organise cricket safaris into the Laikipia area of Kenya where teams will experience playing cricket in a nature reserve with wildlife as spectators. Visitors will also have the opportunity to see abundant wildlife and to experience traditional Maasai Culture."

Donations in support of the tour can be made at http://www.justgiving.com/MaasaiCricketWarriorstoUK.