This account of Hampton Hill CC's recovery from a devastating arson attack is a inspirational story of disaster and triumph written by club member Steve Fidler.

It is also a salutary reminder of the need for clubs to be properly insured. Enquiries about club insurance can be made to our sponsors Mead Insurance who are featured in the right hand sidebar of this page.

An ECB video featuring the club's recovery can also be found here. 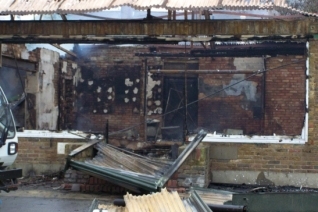 Saturday 9 October 2010 is a date that will be etched into the memories of Hampton Hill Cricket Club’s members for a long time. In the early hours of that morning, officials of the club were woken by a call from police, saying that there had been a fire at the club, in Bushy Park. Nobody was prepared for the devastation they found on arrival. The crews of four fire engines had been battling the blaze for several hours but their efforts had been in vain.

As dawn broke and word spread, the extent of the damage to the 55 year-old pavilion became clear. The building had been completely destroyed and there was no alternative but to call in the demolition team to clear the site.  The fire brigade investigators quickly confirmed that it was a case of arson.

The following day, led by club president, Barry Williams, a hastily convened committee meeting took place as the club tried to come to terms with the very real threat to its existence. The club announced that the fire would not stop cricket being played at Hampton Hill and three Task Forces were set up. The first would organise the temporary facilities required for the 2011 season, the second would begin the process of replacing the pavilion whilst a third would launch The Phoenix Fund – a fundraising effort aimed at raising an initial £50,000.

Hampton Hill’s members and the local community responded magnificently to the club’s plight. The Buy-A-Brick appeal led the way and an imaginative series of events followed, including  a cycle to Paris, rowing on the Thames and a Variety Night at Hampton Hill Theatre. One member had the long hair he had nurtured since his youth, cut off to raise money. By the start of the 2013 season, The Phoenix Fund will have raised closer to £90,000.

Temporary facilities in the form of a series of portakabins received permission in April 2011 and were in place within 24 hours of the planning committee’s decision. Over the next few weeks, services were connected, showers fitted to the changing rooms and a kitchen to the tea room. The whole operation was completed in time for the first league game in early May (the electricity being turned on during the first innings). 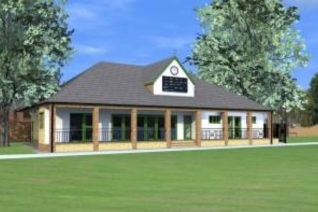 Meanwhile the pavilion rebuild committee, led by longstanding member, Kevin Rice had selected an architect – Steve Macdonald (Macdonald Design) to take the project forward. It was soon clear that the insurance was nowhere near enough to build a pavilion fit for the 21st century and that significant further funding would be required. Another sub-committee was tasked with seeking funding organisations whose criteria were met by the project.

The first stumbling block came in the shape of the club’s tenancy of the ground. Being in a Royal Park, a formal lease could not be granted and the club had operated under an annual licence since 1890.

Most funders were, understandably, looking for considerably more security of tenure. After protracted negotiations with Royal Parks, a 21-year licence was granted which satisfied funding bodies and gave the committee some much needed confidence in the club’s future.

The first grant was awarded by Sport England from their Inspired Facilities Fund. The £50,000 grant came with the proviso that it be spent on sustainable elements of the rebuild. The rebuild committee had already looked at the shell of the building being made of structural, insulated panels (SIPS) and the Sport England stipulation made the decision much easier. A further grant of £50,000 was awarded by the Hampton Fuel Allotment Charity – a local charity set up originally to provide heating for the poor of the area.

The England and Wales Cricket Board had been very supportive of the club’s efforts and had indicated that a substantial sum would be forthcoming, despite limited funds. The governing body awarded the club a grant of £100,000 with a further £30,000 available in the form of an interest-free loan. The new pavilion would have to meet all the criteria of ECB to qualify for the grant and several changes to the design would be required. The old pavilion was set between two large oak trees and they would dictate a slightly smaller footprint, into which the architect needed to squeeze larger changing rooms, more showers, an umpires’ changing room and full disabled facilities. Eventually, a design was submitted for planning consent that complied with all of the funder’s requirements and that the rebuild committee felt would be a worthy replacement to the 1955 version.

During the planning consultation period, a short-list of six contractors were invited to tender for the construction and with sufficient funds now in place, JW Cannons started laying the foundations in September, 2012. A very wet spell of weather, followed by a long, cold winter significantly increased costs and caused the completion date to be set back several times. A track had to be laid across the outfield to enable deliveries, after a lorry had got stuck and caused some damage to the ground. Week by week the structure grew and the shape of the new pavilion was clearly visible by the turn of the year.

The club would like to thank all of its members for their patience over the last two and a half years and all those who have donated to The Phoenix Fund. The members of the club and the wider community will shortly have a pavilion to take the club into the next phase of its long history.

The official opening of the new pavilion is on 7 June.